The key to the adoption of any City Charter is constitutional protection. ​

​Without it, Toronto will continue to be at the mercy of provincial whim.

A City Charter that is merely provincial legislation can be amended or revoked unilaterally by any provincial government, without notice to, consultation with or agreement of the city.  This is the case with the current City of Toronto Act and the Municipal Act of Ontario, which governs all other cities, towns and regions.

It would be pointless for Toronto to do the considerable work necessary to negotiate and implement long-term powers, authority and funding arrangements if they can be simply revoked at any time by the province.

In order to protect and guarantee the City Charter, we propose a single-province amendment to the Canadian Constitution that would:
• Enable the creation of Charter Cities in Ontario
• Spell out the rules for amending any such Charter in the future
• Guarantee that changes can only be made with the consent of the city.

Why Cities Need Protection - a History of Provincial Interference

Predictability and stability of a city's ability to determine--and pay for--its own affairs are absolutely necessary for the success of any city.  Such things are impossible to count on when a provincial government can countermand any city decision before or after the fact.

Even as city governments have matured and become more sophisticated in the past 20 years, provincial governments have demonstrated that they are increasingly willing to interfere directly in affairs that can only be considered purely municipal in nature.  In the past two years, the Ford government in Ontario has elevated this interference to a new level.

Here's a partial list of examples of provincial interference in Toronto's affairs and those of other Ontario Municipalities.

Under Section 43 of the Canadian constitution, any province can make an amendment to the constitution that applies to that province only. (A smaller-than-ten group of provinces can do the same in concert.)  Such an amendment requires only the consent of the province involved, the House of Commons and Senate.

There have been seven single-province amendments to the Constitution since it was adopted in 1982.  Newfoundland passed one in 1997 to establish a secular school system.  New Brunswick passed one in 1993 to establish equality between the province’s French and English-speaking communities. 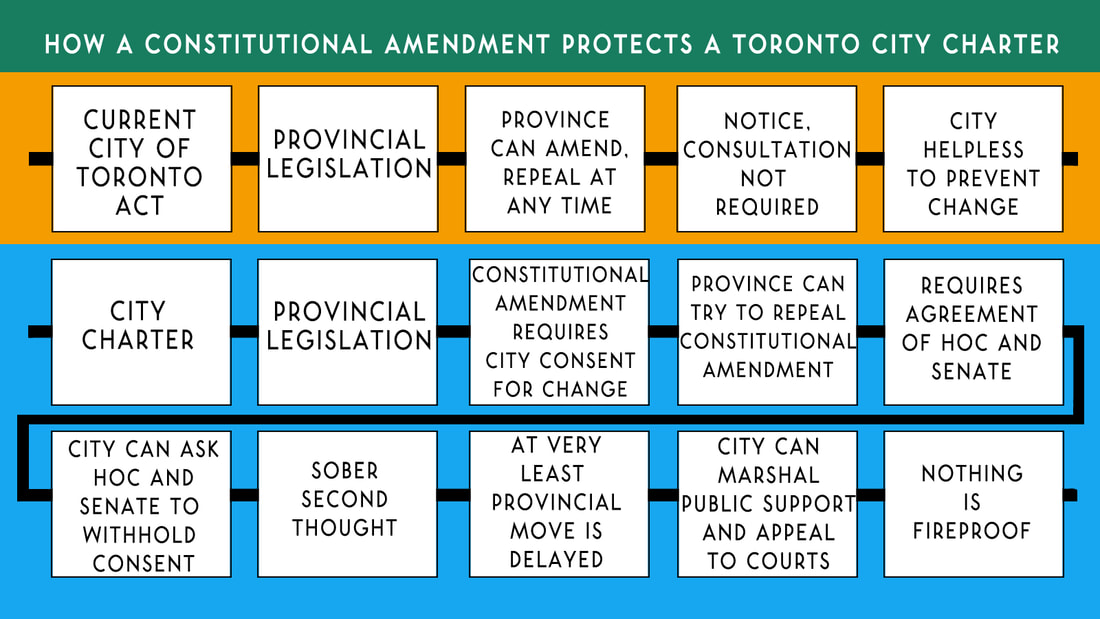 We believe it's important that the City Charter itself not be entrenched in the Constitution.  Doing so would mean that any change to the Charter--even a comma--would have to be approved by both the provincial and federal governments, but the city would not have any say.  This would in effect double the number of senior governments whose permission Toronto would need to change its own charter.

Some cities, such as Los Angeles, allow changes to their Charter only through majority vote of city residents in a referendum.  This additional level of charter protection is somewhat foreign to the Canadian practice, but it could be considered, as a way to ensure voters agree to any change, as a way for a sufficient number of citizens to themselves propose a charter amendment, or as a way to solve an impasse between the city and the province.

No arrangement is fireproof or 100% effective at protecting cities form a provincial government determined to interfere.   For example, a provincial government could seek to amend the constitution, removing the city's involvement in changing the Charter.  But this would require parliament's consent and at least give the city an opportunity to mount a defence, unlike the situation in 2018 where the city had no opportunity to forestall the province's cuts to city council.

While Canada's constitutional rules do not allow for cities to gain co-equal status with a province, a City Charter with constitutional protection would give cities an immeasurably more powerful voice and status in any discussion of municipal affairs.