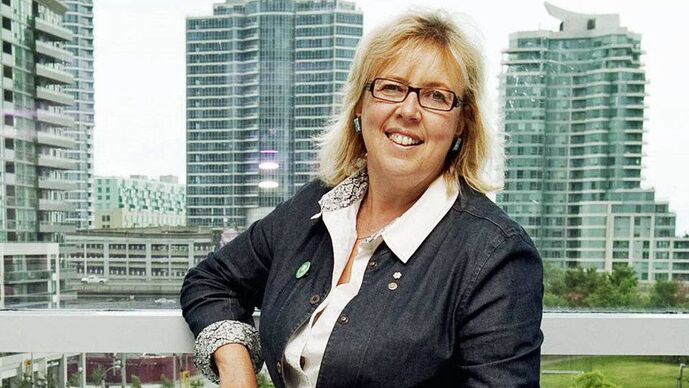 Elizabeth May, leader of the federal Green Party, announced on July 19 that Charter Cities will be a part of her party's platform for the fall election. Photo: Jennifer Roberts, the Globe and Mail
The Green Party of Canada has become the first political party to publicly endorse Charter City status for Canadian municipalities.  Green party leader Elizabeth May made the announcement at a news conference on July 19 in Toronto.

A Green Party news release says, "the party’s plan for City Charters...will give municipalities greater autonomy, more resources to deliver essential services and protection from the provinces in which they are located".

Those are exactly the three key elements of a new deal for cities proposed by Charter City Toronto.

The group has argued that Toronto in particular, and other willing municipalities, should be given much greater ability to make their own decisions in the municipal sphere without having to seek permission from the province.

It also argues for a new financial deal to ensure that cities have the resources necessary to meet the demands placed on them in the 21st century.

Finally, Charter City Toronto calls for the passage of a constitutional amendment giving Charter Cities enhanced status in Confederation and protection from unilateral and arbitrary provincial interference in cities' affairs.

​​“Municipalities are drastically underfunded,” said Grant. “The system is broken. Currently only 10 per cent of every Canadian tax dollar goes to municipalities. It’s totally inadequate and we’ve reached a tipping point."
“Not only does our urban infrastructure need modernizing to adapt to the climate crisis, but our entire approach to municipal affairs and housing needs to be restructured and revitalised.”

Grant was a member of Charter City Toronto's steering committee until he took a leave of absence earlier this year to run as the Green Party candidate in University-Rosedale riding, currently held by Liberal MP and Minister of Foreign Affairs Chrystia Freeland.

The cities agenda announced by the Green Party also includes a "massive project" to maximize the energy efficiency of built infrastructure including urban housing, investment in urban public transit and to address cities' infrastructure deficit.

“Electing more Greens to parliament this fall will ensure that our municipalities and urban infrastructure thrive, and that every Canadian can afford to live where they work,” concluded Ms. May.
chartercitytoronto@gmail.com